Traceroutes can be useful to diagnose slow network connections. For example, if you can usually reach an Internet site but it is slow today, then a traceroute to that site should show you one or more hops with either long times or marked with “*” indicating the time was really long. If so, the blockage could be anywhere from your Internet service provider to a backbone provider, and there is likely little you can do except wait with the infinite patience of the mighty oak.

The subsections below describe operating system traceroute versions, traceroute websites, lists of traceroute information sites, and the original version of the traceroute program.

Traceroute operating systems. On a Windows computer, you can run a traceroute in an MSDOS or Command window by typing “tracert” followed by the domain name, for example as in “tracert www.yahoo.com” shown in the picture below. 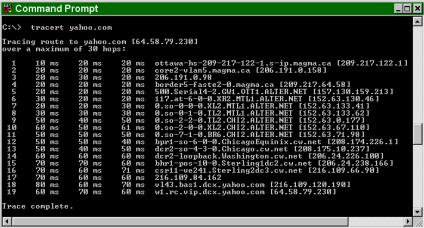 You can list the tracert options with the command “tracert -?”.

Remember when doing an online traceroute that the test is done from the website, so the times reflect the Internet path from that location and not from your computer. However, an online traceroute is still useful to test the speed and length of network communications to an address from various locations around the Internet. If the times returned by several online traceroutes to a given address are consistently long, then the destination’s network is likely having problems. However, if the times are relatively fast from most locations but not from your system, then then there is likely some blockage in the network between you and them, likely in your network.