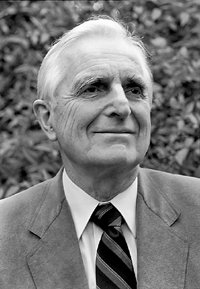 Douglas Engelbart invented the mouse, the graphical user interface, and the first working hypertext system, NLS, which was also the second computer system connected to the ARPANET.

At the end of World War II, Douglas Engelbart was a 20 year old US Navy radar technician in the Philippines. One day in a Red Cross library, he picked up a copy of the Atlantic Monthly from July, 1945, read Vannevar Bush’s article about his “memex” automated library system, and was profoundly influenced by the vision of the future of information technology.

Sixteen years later Engelbart published his own version of Bush’s vision, describing an advanced electronic information system in the paper “Augmenting Human Intellect: A Conceptual Framework”, prepared for the Air Force Office Of Scientific Research and Development, and extracted below:

Engelbart joined the Stanford Research Institute and in 1962 started work on Augment, a project to develop computer tools to augment human capabilities. As part of this effort, he developed a computer system called NLS (oN-Line System), to cross-reference research papers for sharing among geographically distributed researchers. NLS provided groupware capabilities, screen sharing among remote users, and reference links for moving between sentences within a research paper and from one research paper to another.

Engelbart had a vision of an interface between man and machine providing instant connection and communication. Partly in fulfillment of that dream, he invented the first graphical user interface and computer mouse, a picture of which can be found below.

Engelbart demonstrated NLS at the Fall Joint Computer Conference in 1968 in a presentation to several thousand conference participants. He demonstrated the mouse, the first working form of hypertext, and a form of video teleconferencing. A film of the event was made, in which the audience can be seen giving the talk a standing ovation. NLS was subsequently commercially distributed as the “Augment” application by McDonnell Douglas.

In tribute to his work, Engelbart’s NLS system was chosen as the second node on the ARPANET, giving him a role in the invention of the Internet as well as the Web.